Lately quite a lot of people have been asking me about my weight. I lost over 35 lbs in about 4 months and I’ve been a little surprised at how many people have thought it was a big deal and wanted details on my plan. I don’t think anything I’ve done is extreme or weird. It’s mostly just lifestyle changes. I told a few people I would blog the specifics so here it is.

6 months ago my father passed away from a sudden heart attack. While it was a shock, it was not surprising given his lifestyle choices. I decided that I couldn’t change my genetics so whatever else happens, I was not going to contribute to an early death the way my dad did. I didn’t go into this specifically to lose weight, I did it for a healthy life and losing weight has been a side effect of that. 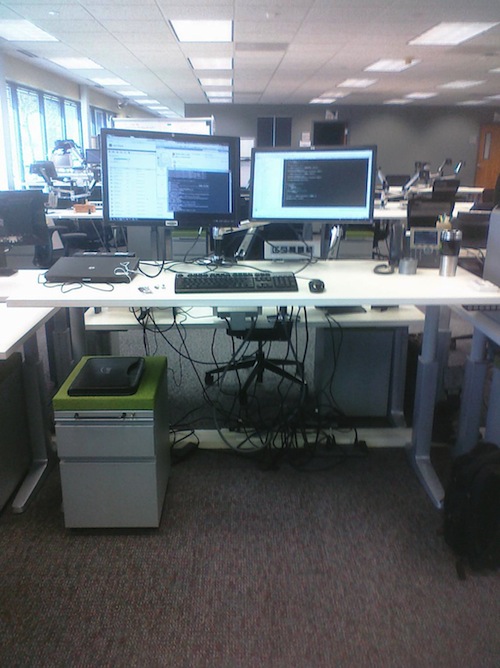 I’m a computer programmer. Not exactly the kid of job that encourages a healthy lifestyle. So I came up with a few rules:

I “work out” 30 minutes a day, every day. “Working out” can be defined as pretty much any physical activity that raises the heart rate. So a long afternoon of yard work counts. When I was in the middle of dropping weight, rather than just maintaining like I do now, I was doing 60 minutes a day broken into two 30 minute chunks.

The most important part of this was at night. My old ritual was to put the kids to bed and then have a big glass of wine (or two) with my ass on the couch. That’s a lot of calories to consume and then sleep on. My new ritual was to cut out the nighttime wine (I still have a glass with dinner), and to not eat anything within 3 hours of bed. I started out riding an exercise bike after the kids went down. The bike has some nice variety of 30 minute programs which I could do while watching Dr. Who.

I also joined a gym. I picked a Planet Fitness that’s close to my work. It’s super cheap at only $10 a month. I go there for a quick 30 minute work out before lunch or in the morning. They have this thing called “The Arc” which became my favorite. I also do strength training. You can burn more calories with more muscle mass so don’t skimp on the weights and do nothing but cardio.

Keep in mind I’m not planning on doing a marathon or anything. I’m not pushing my body to it’s limits on this stuff most of the time. I’m just raising my heat rate to a point and getting a good sweat going. That’s all it has to be. Make it a part of your life, like brushing your teeth.

I have not been following any particular diet. I kind of pick and choose what I want. The main goal has been to simply make healthy choices and do so all the time. If there has been one diet that I’ve followed more than any other it would be the “mediterranean diet”. This is pretty easy for me because I love greek and middle eastern food. I also allow myself to eat as many raw fruits and vegetables as I want. You can’t get fat on raw apples…trust me. Here are some of the guidelines:

Things that are “out”

Things that are “in”

A note on buying fruits and vegetables: We have four kids and with this diet we go through a lot of produce. If we were shopping at the regular grocery store we would go broke quickly. I highly suggest that if you want to do this to go join someplace like Costco or Sam’s Club. You can get a lot of produce for not much money.