I’m not a fan of scrum as a methodology or sprints as a practice. I think it is ripe with inefficiencies and waste. The best explanation I can provide comes from the Greeks.

In Greek mythology there is a character named Procrustes. Now old “Crusty” as I like to call him would invite people passing by his place to stay the night. He had a bed for guests and he would get quite upset if they didn’t fit the bed perfectly. So he would make sure they would by either stretching them if they were too short or chopping off their legs if they were too tall. Eventually Theseus stopped by and fitted Crusty to his own bed. 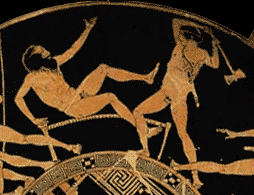 Although it’s not a widely used metaphor today, writers have been using “Procrustean Bed” ever since to describe an arbitrary standard to which reality must be fit. Development sprints are often a Procrustean Bed. We place our stories into them and they tend to expand or contract to meet the time requirement. The very act of saying “this must be done in x time” seems to make the thing take x time. If it’s a simple task the developers tend to buffer it with all kinds of other things (needed or not). If it’s too big to fit then corners get cut.

I much prefer to just do a queue-pull method and concentrate on one thing at a time and letting that thing take the time it needs. I find that the shorter tasks take less time, the longer ones are done right and the team is more honest with the product owners and themselves about how things are going.