We have several different teams all working on the same codebase. Recently we did a cross team retrospective and a couple of related issues came up:

What came out of the retro was a great idea: Pair Programming Bingo. It works like this:

Each team has a “Bingo Board” listing all team members along the top and the sides. You get to mark a square once you have paired with another team member for at least a morning or afternoon session. We also have a column for “outside” meaning any member of a different team. members who get “bingo” by having a complete line get a prize. Teams that get a blockout get even bigger prizes. One idea is to line the bingo maps up and make it into a kind of competition. 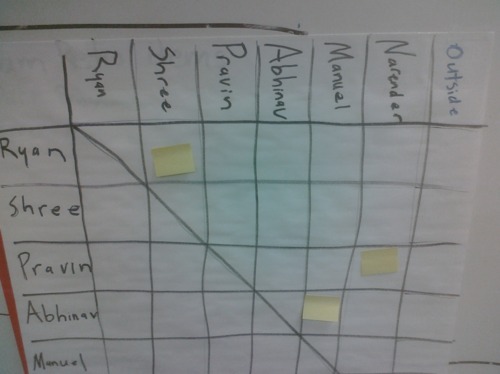 and yes we realize you would only need ½ of a chart but we decided to keep both sides to represent who was the driver and who was the navigator. Anything to encourage more pairing!

More to come as it evolves